Posted on November 21, 2016 by janicetindle.com

“What has been the highlight of your health activist journey? We want to hear all about it, perhaps a conference, a podcast or meeting a fellow HA. What made this experience so special?”

The highlight of my Health Activist journey is glaringly obvious. Writing. I have been a writer all my life, but, it never had a real meaning.  I have always wanted to become an author, but I had nothing really exciting to say.

My love of writing began when I read my first book, ” Dick and Jane.” I loved that book. I read it over and over. I loved the illustrations. I loved the characters of Dick, Jane, Sally, Spot and Puff. I even named my first cat Puff because he reminded me of the orange tabby in the book. I loved that book because that was the book in which I learned to read.

So, as soon I learned to read, I started writing. I submitted a poem to Jack and Jill magazine and to my astoundment, it was published! I taped it up on the wall of my bedroom. Sadly, the poem was lost. I have no memory of what it said, but I do remember how being published made me feel. It made me feel…heard. I felt validated and proud. I don’t recall my family making a big deal over it, but my teacher did. She encouraged me to write. She told me that all good writers read. So I read. A lot. I bought books with my allowance and I kept them neatly on the bookshelf in my room. I wrote, but I never submitted another thing to Jack and Jill magazine. I’m not sure why. Could have been a lack of encouragement. Or confidence.

I became the librarian’s helper and by the time I finished grade school, I was the only one in the school that had read every single book in the library. One hundred and five books. At graduation, I received the Principal’s Award for that accomplishment. I still have that pin. To this day, it makes me proud because I was the only one that completed that task. I have to thank my teacher, Mrs. Fullerton, who was the librarian and music teacher, for being such an encouragement to me. She adored me. For a shy girl with thick glasses and skinny limbs, she was a lifesaver. She put me in all the music programs where I fit and always gave me a solo. At my eight grade graduation, my solo, “IF” by David Gates of Bread, got a standing ovation. I realized there too, of the power and excitement in artistic expression. I learned that for a few minutes, a few very important minutes, I could get people to listen to me.

In high school, I wrote stories for assignments that were so real, one about epilepsy, for example, that I got called to the Principal’s office because  I had captured the experience of being an epileptic so well, they thought I had the condition! I explained that I was writing in ” the first person” for effect. I guess it worked!

Flash forward to 2010. A car accident. A brain injury. A shaken brain and a lost soul. No more singing. No more recognizable personality. No more…me. I had to rebuild my life one section of myself at a time. It’s a terrible thing to lose yourself. To not feel comfortable in your own skin, to be lonely for your yourself, your thoughts, feelings, likes, expressions. To mourn your creative soul because in its place is this big mountain of confusion and pain. It’s like someone just came up to you, put a vacuum next to your brain and sucked you out. All of a sudden, there you are, just a hollow soul looking for all your bits and pieces and wondering, ” Where did I go?” ” Am I ever coming back?” ” Will I ever be the same again?” Suddenly, you’re Humpty Dumpty and no one can put you back together again.

My writing started up again with emails to my attorney. Strange, angry, repetitive emails about my life and what was happening to me. They read like a diary and to this day, I can’t bare to read them because the pain and confusion is just so heartbreaking. I was very, very lost.

However, my rehabilitation therapist encouraged me to write. She got me online and in touch with the world of the brain injured. That’s when things started to take shape. I realized pretty quickly that this was going to be an uphill battle. The day I discovered, from my point of view, that brain injured people were getting the short end of the health care stick, so, without even realizing it, I became a Health Activist/Advocate. I needed a constructive outlet for my anger and righteous indignation. My therapist gave the suggestion, and I started writing.

One night, after a week of being on  a drug some doctors like to give to brain injury survivors, I sat down and wrote, ” Three Is All You Need.” It was beautiful.

The drug unfortunately, was not for me. It kept me from sleeping and increased my migraine. It felt like I was drinking caffeinated drinks all day long. So after a week of that, I had to stop just to get some sleep.

My therapist loved what I had written. She asked if it could go in their newsletter. She said that it would help a lot of people. So I agreed. Then, with her encouragement, I submitted it to my favorite magazine, Today’s Caregiver. They loved it. So much so, that it went on their online magazine, Fearless Caregiver and later, they made it the title and focus of another issue. I was very proud. It felt just like that day, as a little girl, that my poem was published in Jack and Jill magazine. http://todays-caregiver.tumblr.com/post/115938371066/three-is-all-you-need-by-janice-tindle-ive

I had a purpose again. I had a talent and a skill. Where everything else, including my singing voice and my social skills seemed to have disappeared, there was this one thing, this precious part of me that the vacuum had missed. This was profound because it meant I was still in there, at least in part. I had something to build on. And build, I did.

I teamed up with a beautiful, sweet soul by the name of Trina Chambers-Bradlee.  We had met in a Facebook support group, became friends, and together we made The Traumatic Brain Injury Resources Page. This was because I couldn’t navigate the computer and World Wide Web to find services for myself. I thought it would be helpful if there was one place, like a FB page, where TBI survivors and their caregivers could go to find financial resources. Trina loved the idea, and since she had the know-how and experience as a support group administrator and seemed pretty good at the computer, I suggested she do it. She was very generous with me in sharing the acknowledgement of its creation. I posted everything I could find as well. Today, there are over a thousand people who use the page. When you consider that it was because I saw a hole in the system and Trina helped me fill it, that’s pretty wonderful. I then learned to make pages on Facebook and I made five others. Each one has been a wonderful experience. I’m leaving Facebook at the end of the year, but I leave feeling very good about what I’ve done to help other people with the same problems as me.

I started three groups as well on Facebook, and although, as I said, I’ve decided to move on, those groups are still there, each a small, separate niche’ for those who feel alone.

My writing continued on so that I became a contributor to themighty.com and I continue to blog and write in other places. My article, ” 7 Ways To Support A Loved One With A Traumatic Brain Injury,” was first published on the mighty.com. It has been very well received. I’m equally proud of that article because it has helped so many. https://themighty.com/2016/05/how-to-support-a-loved-one-with-traumatic-brain-injury/

But before themighty.com, I  was humbled to be chosen in 2015 for the very first issue of TBI Hope and Inspiration Magazine. I then became a contributor as well. http://www.tbihopeandinspiration.com/march2015.pdf

And yes, there will be a book. There will be several books. When the time is right, when my responsibilities as a caregiver ease, and when I’ve grown to be what I invision for myself, there will be a wonderful book that I will be proud to have sit on the shelf where maybe some shy, skinny girl or boy with thick glasses and a love for reading will find it. If I do it right, they will become inspired to find that little piece of themselves that the world vacuum can’t suck out. It won’t be a fairy tale, or nursery rhyme. No Dick and Jane primer either, but perhaps it will take hold in just the same way, so they too will  find their inner form of Rene’ Descartes quote and say, ” I _____, therefore, I am.” 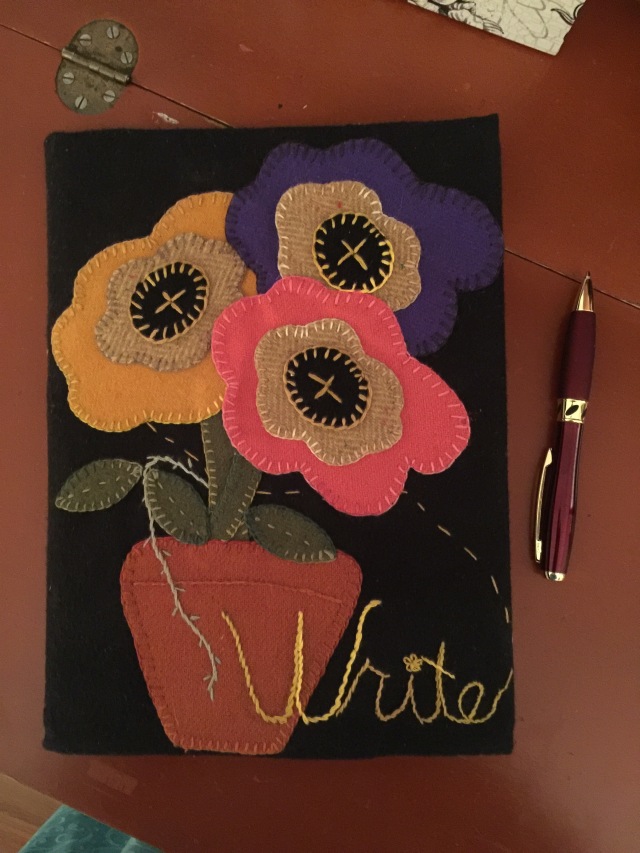 My writing journal made by my cousin, Deborah Kropp

NOTICE: NOTHING, and I mean NOTHING, from my website janicetindle.com may be use without a request in writing to me. Permission, if granted, will be done in writing. Failure to do so will result in possible prosecution. I am the sole owner of my words and at point of publication on this site it is copyrighted as mine. - copyright 2012 Janice Tindle In 2010, I suffered a traumatic brain injury and other injuries when hit by an under insured driver. It changed my life. I now live with Dystonia, a rare and painful neurologal disorder that causes involuntary muscle spasms and abnormal posturing. There is no treatment or cure. The best one can do is treat the symptoms. You can learn more at DMRF.org. I try to write about people and things that help and inspire my readers. You can find more of my story by going to helphopelive.org. I am also on Facebook, where I have five pages, Pain Brain -Anti- Inflammatory Foods, Brain Tears, The Positive Posters Page, Traumatic Brain Injury Resources Page, Janice Tindle- Writer. I am also on Twitter and LinkedIn. Simply Google my name and my published articles should appear. I've been published in Fearless Caregiver, Today's Caregiver, TBI Hope and Inspiration Magazine, The Mighty.com, and several other publications. I am currently a caregiver for my dear mother. My hope is to someday finish my books, "Get Back Up!" and "Galicia's Granite" during my mother's lifetime. Your interest in my care, recovery and writing is greatly appreciated. Thank you. Comments are welcome.
View all posts by janicetindle.com →
This entry was posted in brain injury, caregiving, coping skills, disability, honesty, human interest, humanity, inspirational, Inspiring, life changing, motivational, musings, people, poetry, prose, self, spiritual, support groups, thought provoking, tindle, traumatic brain injury and tagged health advocate, wegohealth, writing. Bookmark the permalink.