My Dad was a tough guy. It least that’s what he wanted you to think. But he had a sweet, gentle side that few ever saw him display. However, I saw him display this side one early morning, when no one but my Dad was usually awake. I don’t recall what woke me, perhaps it was my dog’s simper, but as I got closer to the kitchen, I could hear my Dad talking to Sparky, our collie mix. He was rubbing Sparky on the belly and talking to him in the way that only a person who loves his dog does, ” You like that boy, huh? You like that? Good boy, good dog, good boy! You’re a good dog, good boy!” Sparky was laying at my Dad’s feet, enjoying the attention. Apparently, this was a normal morning routine that only the two of them shared, and just in the morning, because the rest of the time, he was a strict disciplinarian with the dog. And Sparky obeyed. Maybe Sparky loved him too. They didn’t see me as I backed away from the doorway.

Sparky wasn’t allowed past the kitchen. He would sit in between the kitchen doorway and the living room. He would try to inch his way into the living room, and all my Dad had to do was look and point and Sparky would back up. I used to sit on the floor next to my dog to keep him company. Whenever my Dad wasn’t around, my brother and I would sneak him in the living room. Mom let us. She loved that dog.

I had brought him home from a trip to a friend’s farm in Ohio. My great-aunt and uncle had taken me there for a visit. I saw that their dog had puppies and I fell in love! The mother was a border collie mix on a sheep farm. They thought the father was either the German Shepherd on the next farm or possibly a wolf, but he was the cutest round little puppy. I begged to keep him, and without asking my parents, my great-aunt and uncle let me bring him home. My parents were not happy, but what could they do? They could hardly return him. My brother, who had asked for a puppy too, also wanted him. We named him Sparky. It was wonderful. We had fun taking good care of him. But as he grew, we noticed he had a wild side, and he would lash out, and then it was as if he became ashamed and apologized by licking us. He had definite boundaries, and you could not change them. One was his body. He had areas you could not touch or brush. And since he had a thick coat like a collie with a mane, he would get matted hair that we had to cut out. He didn’t like that either.

Sparky grew and kept on growing. He was strong too. He would pull any chain off the post and take off down the street pulling the chain and the post behind him. Neighbors would call and say, “Come get your dog. He is in my back yard.” He had a big personality to go with that big body! Even though we had a big yard, he loved to run and visit the neighborhood, whenever he had the chance!

He loved spaghetti! He would eat it with tomato sauce and get the sauce all over himself! The other people food he went crazy over was pizelles! He would droll when we made them. He was highly excitable, and loved to jump up on folks that he liked by putting his paws on their shoulders and licking their face! If he liked you, he just HAD to show you! When my great-aunt came to visit, he would go nuts over her, crying, yelping and wagging his tail so hard his whole hind end would shake!

Sparky loved the snow, and would stay out until he had ice between his toes. Once, my brother and I built an igloo and he took it as his doghouse and wouldn’t come out. It was the cutest thing! In the summer, he would play with the sprinkler for hours! He didn’t mind being wet! His bark was three “woofs” in a row, a pause, then another “woof.” He would whine a lot too! He loved to be with people. He didn’t like being alone. When my grandfather walked him, he walked very nicely, but when I walked him, he pulled me everywhere! One time he dragged me through three yards chasing after a rabbit! I was a mess!

Even though we loved him so, my Dad knew something was wrong. Sparky wasn’t a city dog. He was a country dog. He was not meant to be on a leash. For example, we had a pool table in the basement. Sparky would grab the mop and run around and around the table pool herding the mop. This made him very happy. We didn’t understand he needed more than us. But my Dad did, so one day Dad made a decision without us that would change all our lives forever.

Dad would drive on his job to Burgettstown Pa. It was the country and without telling us, he had made arrangements to take Sparky to a sheep farm. Without so much as a good-bye, he loaded him up and took him away. We cried buckets. We were so upset with Dad. How could do this? It was heartbreaking.

We missed our dog terribly. But Dad said, as soon as Sparky saw the farm, he jumped out and went straight for the sheep and started to herd with the other dogs. How could we argue with that? Sparky stayed in the house with the farmer and slept in front of the fire at the foot of their bed, while the other dogs slept in the barn. (In our house, he slept in the basement.) They changed his name, to what, Dad never said. But one day, as we were watching the news, they had a story about sheep farmers and the farmer’s dog jumped up on the reporter and started licking his face! It was our Sparky! We were overjoyed to see him! Now, in those days, things were a lot different from today. There were no recordings or internet, nothing, just television and radio. So, if we wanted to find out where we was, we would have had to have tracked down the reporter at the station and got him to tell the farmer we wanted to come visit, but again, we had no way to get there. My brother said when he was old enough to drive, we would drive out ourselves and find him, but by that time, our dog would have been pretty old, so we never tried.

Dad did stop by to check in on him for a time afterward, but he never took us nor would he talk about it, but decades later, when my Dad had dementia, I got him on a rare day to let me in on all the details. You see, in his mind, he thought it would be easier on us and the dog if we just made a clean break. He didn’t understand our point of view. He didn’t give us the credit to realize for ourselves that Sparky didn’t belong with us. I realized later in life that Sparky never should have been allowed to go to the city to live. Often times people make emotional decisions when getting animals and don’t consider that what is best for the animal is the priority, not your want, but their need.

We never got another dog. Neither my brother nor I ever got another dog, but I wanted to, however I never quite made the move to owning another dog. Since I suffered a traumatic brain injury, I thought about getting a service dog, but I worry that I can’t take care of dog yet. Maybe someday, when the time is right, a dog will come into my life that will be all I need and this time I will make sure that he belongs in my home. Maybe the farmer’s family will see this story and let me know how things turned out. But no matter where he lived, there’s one place Sparky will always belong; in our hearts. 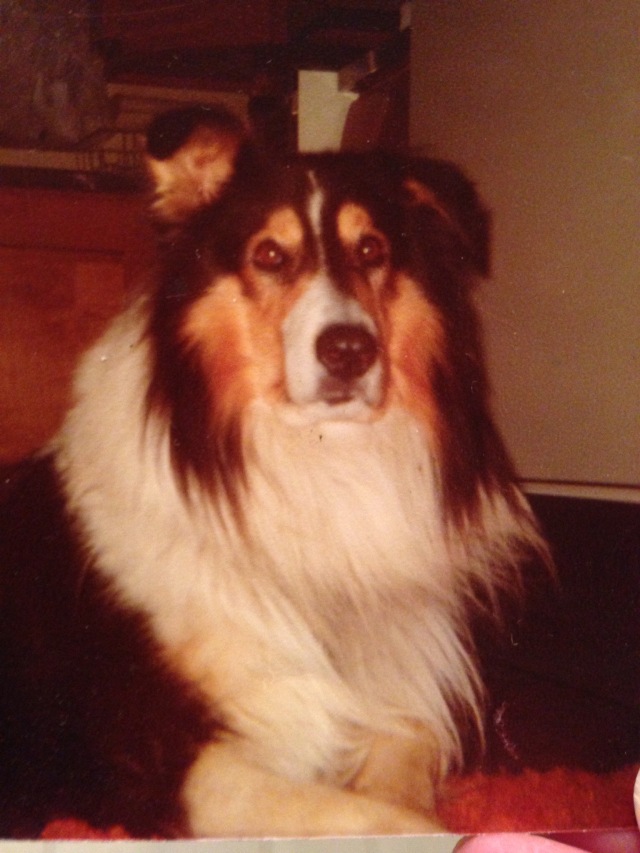 NOTICE: NOTHING, and I mean NOTHING, from my website janicetindle.com may be use without a request in writing to me. Permission, if granted, will be done in writing. Failure to do so will result in possible prosecution. I am the sole owner of my words and at point of publication on this site it is copyrighted as mine. - copyright 2012 Janice Tindle In 2010, I suffered a traumatic brain injury and other injuries when hit by an under insured driver. It changed my life. I now live with Dystonia, a rare and painful neurologal disorder that causes involuntary muscle spasms and abnormal posturing. There is no treatment or cure. The best one can do is treat the symptoms. You can learn more at DMRF.org. I try to write about people and things that help and inspire my readers. You can find more of my story by going to helphopelive.org. I am also on Facebook, where I have five pages, Pain Brain -Anti- Inflammatory Foods, Brain Tears, The Positive Posters Page, Traumatic Brain Injury Resources Page, Janice Tindle- Writer. I am also on Twitter and LinkedIn. Simply Google my name and my published articles should appear. I've been published in Fearless Caregiver, Today's Caregiver, TBI Hope and Inspiration Magazine, The Mighty.com, and several other publications. I am currently a caregiver for my dear mother. My hope is to someday finish my books, "Get Back Up!" and "Galicia's Granite" during my mother's lifetime. Your interest in my care, recovery and writing is greatly appreciated. Thank you. Comments are welcome.
View all posts by janicetindle.com →
This entry was posted in brain injury, duty, essay, family, human interest, life changing events, love, people, self, short story, thought provoking, traumatic brain injury and tagged animals, border collie, burgettstown, burgettstown sheep farm, childhood memories, collie, dogs, doing what's best, farm, farm animals, farmers, pets, picking the right pet, sheep, wolf. Bookmark the permalink.