Light To My Roadway /Written by Janice Tindle

Posted on January 6, 2014 by janicetindle.com

I don’t know if you have ever had to try to get something from city government, but it can be a real headache. A simple request often has to go through a lot of red tape, meetings, and mounds of paperwork just to get on the schedule for your request to be heard. So when I called the City of Pittsburgh for a street light to be installed in front of my mother’s house, I expected a long wait. However, I am a person who believes in what I call “the ten person chain of command.” I believe if you plan it right, you usually get whatever you want or need in ten phone calls or less. The first call is the most important call, so it must be carefully chosen, or else the whole thing falls apart and you have to start all over again. Well, this story is about a street light. The road in front of my mother’s house was very dark at night and you couldn’t see your way to her walk unless you were carrying a very bright flashlight. It hadn’t always been that way. One day, the street light was mysteriously taken down. We put up with it for a bit, thinking it would be replaced with a new one, but a new one never came. We heard a rumour that a neighbor was behind the disappearing lamp, however no one was admitting to making the call. So, after my great-aunt moved into the other half of my mother’s duplex, it became apparent that something had to be done. Now, quite elderly, the two had stopped going to evening worship services because they were afraid of falling in the darkness to get into the car.
My first call was to the mayor’s office. Start at the top and work your way down, it’s easier. They put me in touch with the right department and I asked to speak to the person in charge of street lights. To my surprise and delight, the man said, “Speaking,” I politely explained the situation. He then looked it up and told me that a neighbor had complained that the light was shining into her bedroom at night and she couldn’t sleep. (I would have suggested a sleep mask) but the city came and took it down. He gave me the address. I replied, “Well, I don’t think she’ll mind now.” “Why is that?” he asked. “Because she is asleep over at Calvary Cemetery, so I don’t think the light will bother her anymore. Whereas, there are two elderly widows of World War II veterans that would like to go to God’s house in the evening. Could you see your way clear to light their roadway?” He said, “I’ll see what I can do, but I can’t promise anything.”
One week later, we had our street light back in place, and two God-fearing woman went to pray, happy and grateful.
I sent the man a thank you card, because that’s how I was raised. A few days later, he called. I told him all was well. He told me he was touched by my card and he would put it with the others, if he had any. “I have lots of complaint letters, but just one thank you. I am going to keep it on my desk to remind me, that there are people who appreciate what we do.”
And so it was a happy ending to what could have been a frustrating ordeal. Be nice. It saves time.
“Your Word is a lamp to my foot and a light to my roadway.” – Psalms 119: 105. 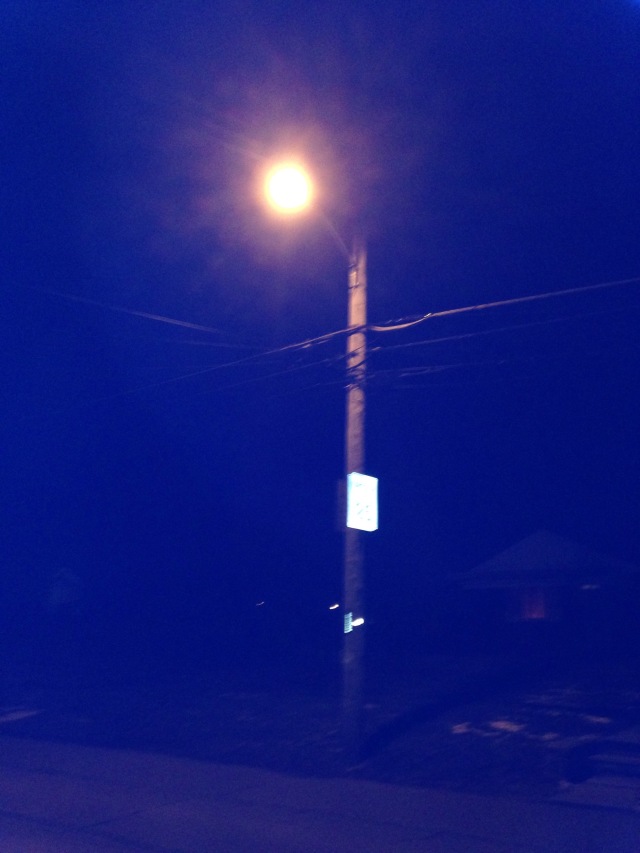 NOTICE: NOTHING, and I mean NOTHING, from my website janicetindle.com may be use without a request in writing to me. Permission, if granted, will be done in writing. Failure to do so will result in possible prosecution. I am the sole owner of my words and at point of publication on this site it is copyrighted as mine. - copyright 2012 Janice Tindle In 2010, I suffered a traumatic brain injury and other injuries when hit by an under insured driver. It changed my life. I now live with Dystonia, a rare and painful neurologal disorder that causes involuntary muscle spasms and abnormal posturing. There is no treatment or cure. The best one can do is treat the symptoms. You can learn more at DMRF.org. I try to write about people and things that help and inspire my readers. You can find more of my story by going to helphopelive.org. I am also on Facebook, where I have five pages, Pain Brain -Anti- Inflammatory Foods, Brain Tears, The Positive Posters Page, Traumatic Brain Injury Resources Page, Janice Tindle- Writer. I am also on Twitter and LinkedIn. Simply Google my name and my published articles should appear. I've been published in Fearless Caregiver, Today's Caregiver, TBI Hope and Inspiration Magazine, The Mighty.com, and several other publications. I am currently a caregiver for my dear mother. My hope is to someday finish my books, "Get Back Up!" and "Galicia's Granite" during my mother's lifetime. Your interest in my care, recovery and writing is greatly appreciated. Thank you. Comments are welcome.
View all posts by janicetindle.com →
This entry was posted in caregiving, duty, essay, family, honesty, human interest, humanity, humor, inspirational, life changing events, love, motivational, musings, people, religion, short story, spiritual, thought provoking, tindle and tagged bureaucracy, city, government, light to my roadway, red tape, scripture, veterans, widow, Word. Bookmark the permalink.